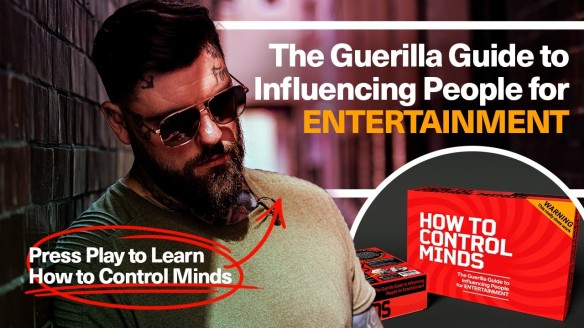 I’ve thought long & hard before posting this as I know that…
Firstly many will just dismiss this as some clever subversive Marketing angle to help sales of the new “How to Control Minds” product from Peter Turner & Ellusionist – that it is most certainly NOT I can 100% assure you and indeed that fact should become clear very shortly.
Secondly, some will claim this is only being posted so I can plug some of my own products, whilst it is true that some of my products are linked to below that is only because NOBODY ELSE OFFERS ANYTHING CLOSE to the context of what those particular items teach as will become clearer when viewed in context of entire post.
Thirdly some (especially those who already take delight in posting lies and fabricated defamatory BS about me on the internet) are likely to inaccurately claim that this post was/is made through some kind of jealously or envy rather than the REAL MOTIVE OF SAFETY & PROTECTION OF THE GENERAL PUBLIC & THE HYPNOSIS INDUSTRY in general.
So before I explain WHY EXTREME CAUTION SHOULD BE OBSERVED by those who have (or do) purchase “The How to Control Minds Kit” please let me point out that personally I consider Peter Turner a Friend & respected Colleague and as is illustrated at the next link I had/have absolutely nothing but praise for his previous Ellusionist Box Set entitled “How to Read Minds”
https://www.facebook.com/alexthehypnotist/posts/10158184949652806

THE ULTIMATE – HOW TO CONTROL MINDS TOOL KIT

PLUS HOW TO TURN PSEUDO HYPNOSIS INTO GENUINE TRANCE

Those who have followed claiming to teach “Hypnosis Without Trance” or similar have in truth just recycled things they most likely learnt from Royle’s training materials and courses in the first place.

The Late Dave Elman is a true legend in the world of hypnotherapy. Interestingly, he was also a comedy stage hypnotist for many years.

Within his book, “Hypnotherapy,” he hid in plain sight arguably the most powerful and useful technique that any hypnotist or, indeed, any person wanting to look like a hypnotist, could ever use.

This secret technique will enable you to stick people’s hands to walls and make their foot become welded to the floor, whilst also enabling you to make people forget their names and a whole host of other amazing hypnotic feats.

Imagine being able to snap your fingers and then a volunteer is unable to lift a deck of playing cards off the table, or they find that a coin becomes so hot that they are unable to hold onto it any longer.

All of these things become incredibly easy when you have studied the contents of this unique training package.

The truth is that this technique does not use any genuine hypnosis whatsoever!

However, within this package, you will learn how to use these secrets in order to get people into genuine hypnotic trance states rapidly and safely if you should so desire to take things to the next level.

As well as learning “Elman’s Biggest Secret,” you will also be taught Royle’s “2 are Bad Subjects Ploy,” which is arguably the forerunner to Luke Jermay’s “Touching on Hypnosis” approach from his Premise and Premonition DVD Set.

You will learn Royle’s “It’s Almost As If” and “I.I.C” Principles, which are arguably the forerunners to Anthony Jacquin’s Automatic Imagination (AI) Model.

Combining these secrets together will enable you to seemingly be able to hypnotize anybody, anytime, any place, anywhere without ever possibly being seen to fail in any manner.

These are the ultimate secrets of pseudo hypnosis — even those taking part will come to believe that they have genuinely been hypnotized.

Also included are other video links that would usually cost you at least another $47.

Just a few of the things you’ll learn from these bonus videos are how to:

*Mentally glue their hands to a table top so they are unable to lift them up until you tap the back of their hands, saying that their hands can now be lifted up once again.

*Weld their foot to the floor. They will find it impossible to lift their foot or leg off the ground until you remove your mental influence from them.

*Make their own name vanish into thin air. They will be unable to say it or remember it until you touch them on the chin and snap them out of their apparent “trance” state.

*Stick their eyelids together. They will be unable to open their own eyes until you allow them to do so (two different methods taught and explained).

*Hypno-Heat – The legendary hot-foil-in-hand trick is demonstrated and then taught and correctly explained. (Not suitable for minors as the “hypnotist” or as a volunteer.)

*Magnetic Fingers – Discover how to apparently, through pure suggestion, make people’s fingers draw together like magnets — with them unable to resist.

*Locked Hands – As the title suggests, you’ll learn a truly NO FAIL way to lock people’s hands together so they are unable to separate them until you tell them they are able to.

*Reality Changer – This is a technique whereby you can demonstrate that your verbal suggestions can change someone’s view of reality in a few short minutes. Indeed, you then demonstrate in a manner that nobody can deny (including the volunteer assisting) that proves 100% that the person’s reality has indeed changed following your suggestions. Best of all, there is no dual reality and this, as taught, works perfectly each and every time.

*Mobile Magic – You are supplied with an animated hypnotic spiral disk, for use on your phone, that will enable you to apparently place people into deep hypnotic trance states within seconds of meeting them. It will also enable you to perform (if you so desire) a complete act or show of comedy hypnosis stunts, routines, and demonstrations without ever having any fear of failure. This is dual reality at its best, used in a manner where the person who is “hypnotized” can, and often truly does, end up sincerely believing that they have been hypnotized.

*Hypno-Tron – For the first time on video, Royle reveals his electronic speed hypnosis device that enables you to make people feel as though they are being hypnotized. Consequently, they are far more likely to become genuinely hypnotized. However, even if they don’t, they will still say they “felt like they were being hypnotized.” This makes you appear to be a genuine hypnotist indeed!

You will learn all of the above and, along the way, will also gain insights into how to use these “hypno-tricks” and “mind control stunts.”

These are practically guaranteed to work every time — they can help you become a far more powerful and successful exponent of real hypnotism as well.

And that really is just a tiny example of what you’ll learn from the over 6+ hours of video training included in this package.

You’ll learn more than enough routines and techniques to be able to perform a complete hypnotic-style show for close-up, street or even stage, cabaret, and theater performances.

For example what you see demonstrated in the next short video you will be easily able to duplicate when you have studied this book and it uses no Genuine Hypnosis Whatsoever (unless you later decide to use such as well) as its all HYPNO-TRICKS.

NOTE A = This Product was first released by Magic Dealers worldwide on 29th December 2016 (fast approaching 5 years ago) and indeed was already on sale directly from the author much earlier that same year.

NOTE B = Some (just a small selection) of the information Royle Shares in this step by step course was also included as a Large Chapter in SOME EDITIONS of the Book entitled “Hypno-Effects by Peter Turner – Volume 11” which was also originally released in 2016, HOWEVER there is FAR MORE REAL GOLD in this massively expanded and heavily supplemented by training videos release.

FACT = It is true to state that I, Jonathan Royle have taught more of the truly Successful Working Comedy Stage Hypnotists, Street Hypnotists & Hypnotic Mind Control Experts in the World than any other living trainer as illustrated by just some of the many such similar testimonials we have on file such as these