It seems that there’s a new version of ACAAN being released every five minutes and I’ve personally spent a fortune on them over the years including most recently purchasing The Berglas Effects which by the way is a great read..

However having looked at them all I have to be honest and say that I still only use the two versions that I have now been performing for many years.

The methods used in the first video are sure fire and guaranteed to work every time which is why its my preferred stage method, whereas the method used in the second video only works in this manner around 85% of the time, the other 15% of the time one or two methods not entirely dissimilar to the kind of thing Mr. Berglas teaches in his book have to be used to ensure a positive outcome.

I hope you enjoy the clips and look forward to hearing your feedback of these two routines, the methods for which I devised & will be teaching in great detail in my forthcoming “Mentalists Cook Book” DVD Set which is due for release in Mid August 2012.

To be one of the first to hear about the release of this amazing Mentalism Training DVD set be sure to add me as a friend on facebook at http://www.facebook.com/alexthehypnotist/

You can also see performances of some my other Original Mentalism Ideas that will be included on the DVD set on my Youtube channel – http://www.youtube.com/user/celebrityhypnotist

The Holy Grail Of Mentalism – The Berglas Effect ACAAN – LIVE..

Review of The Berglas Effects by Richard Kaufman & David Berglas… 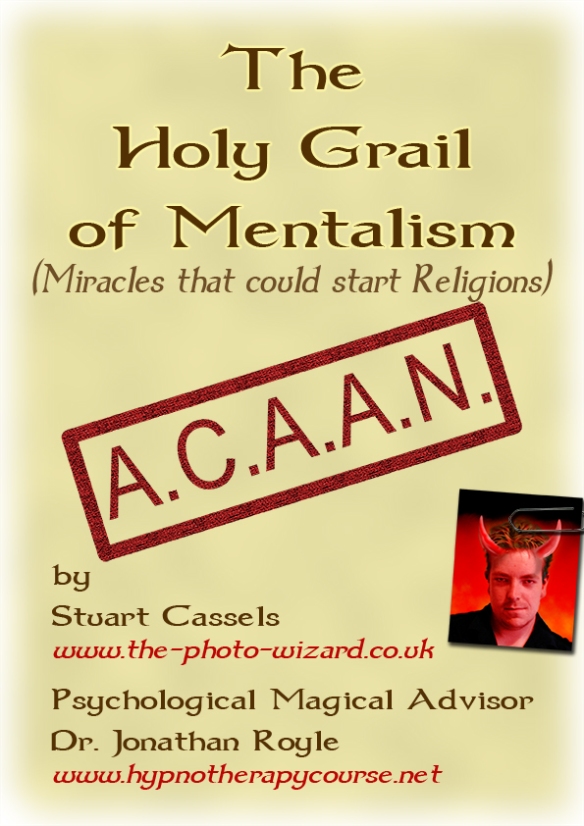 Having now read the book “The Berglas Effects” by Richard Kaufman, whilst it is excellent in many regards, you need to consider that the newly reprinted second edition of this book will cost you at least $140 (approx £88) to have shipped to you worldwide…

And for that price your essentially going to have to start learning a completely new way to handle a deck of cards in order to learn literally only half a dozen effects all of which are very similar in nature and style, and all of which will take a lot and I mean an awful lot of dedicated practice before you ever have a chance of pulling them off in public.

I’ll continue this review in a moment but first take a few moments to watch these few short videos, bearing in mind that you can learn all of these Secrets and many others (enough for a complete Stage and Close-Up Magical Mentalism Show) for just £60 (approx $94)

In this Admittedly slightly unclear video clip, that was filmed on an old mobile phone in a nightclub bar, Hypnotist Robert Temple Performs another version of ACAAN that is taught in “The Klear Thoughtz” Package..

And in this Clip Stuart Cassel’s performs one of the versions of “The Berglas Effect” Any Card At Any Number that is inside the pages of his book “The Holy Grail of Mentalism” as per – http://www.magicalguru.com/acaan.html

SECRET’S EXPOSED = Then To Discover The Secrets of These Two Methods, along with numerous other Commercial Ways to perform ACAAN and other Mentalism Miracles take a look at http://www.magicalguru.com/klearthoughtz/

Bear in mind that when you order the Klear Thoughtz Package you will learn exactly how to perform all of the versions of ACAAN and The Berglas Effect that you have seen performed in the videos above and also will learn how to peform this variation entitled ANORAK (Any Number on Reverse of Any Kard) as per details at –  http://www.magicalguru.com/anorak.html

And remember you can learn all of the above, along with Numerous other Magical and Mentalism Routines for just £60 (approx $94) and the methods used are far easier to learn and perform than anything you will find within the pages of The Berglas Effects book by Richard Kaufman and David Berglas of that I can assure you.

But hey I know what your thinking, your thinking this sounds to good to be true, well consider that for just £60 (approx $94) at http://www.magicalguru.com/klearthoughtz/ you will not only get the “Klear Thoughts” Ebook, but also will be sent numerous Physical Training DVDs Post Free Anywhere in the world and you’ll start realise where your money would be best invested.

Indeed as part of this bumper package you’ll also get the “Holy Grail of Mentalism” book of which personal friend to David Berglas, the man voted Worlds Greatest Mind Reader Mentalist Marc Paul has said:

“Thanks for “The Holy Grail of Mentalism”. There is some seriously good thinking here, I particularly like the section on how to create “real miracles”. I have always believed that truly inexplicable mentalism is only achieved by going that extra mile; you obviously believe the same”

So bearing that in mind don’t you owe it to yourself to take a look at whats on offer today at – http://www.magicalguru.com/klearthoughtz/

I know I may seem a little biased, but I can assure you that not only would you be spending less money by ordering the “Klear Thoughtz” package, but also you’ll be getting access to far more easy to learn and easier to perform real world commercial material.

Take a look at http://www.magicalguru.com/klearthoughtz/  and also take a look at the details at the links on that page which explain all of the material you’ll recieve and learn for your one time investment of just  £60 (approx $94) and you’ll realise that this Limited Time Only bumper package offer represents the biggest bargain of your magical lifetime.

And Consider that amongst all the Bonus Materials you will also find “Royles Thoughts On The One Ahead Routine” which when published within the pages of Paul Rohamnys Mental Epic Compendium caused Magic Reviewer Cris Johnson to state:

There are so many routines to explore that while I have combed through this book cover to cover, I haven’t retained nearly as much as I like.

Personally, one of the most mind-blowing routines in the entire book is Jonathan Royle’s “Royle’s Thoughts on the One-Ahead Principle.”

I challenge you to read this section of the book and not feel energized by what appears to be a simple card routine. It is, for me, one of the most stunning routines I’ve ever read.

I only wish I could have seen it performed and experienced the impossibility of it before reading about the work.

While I don’t expect any Mentalist who hates using playing cards in his/her act to be totally converted after reading that section, I do believe that this routine has the BEST chance to cause some of these folks to re-consider some of their views.

So the bottom line is, if you’ve got hours and hours each day to practice for the next 6 months (or perhaps longer) then you may well enjoy learning the material inside “The Berglas Effects”

However if you want material that is easy to learn, relatively easy to perform (well actually very easy compared to contents of The Berglas Effects) and would like to get ten times the amount of workable material for both Stage and Close Up for a fraction of the cost then you’d be wise to take a look at whats currently on offer for a Limited Time only at: