Firstly to address the “Are they using Actors” Question I suggest you take a look at the posts on my Twitter Profile at http://www.twitter.com/roylehypnotist

Seriously as in posts on their from the dates of March 21st and March 22nd and then after those dates as well I have posted the proof that sadly the vast majority of the so called contestants seem to come from what I would call “fame seeking” backgrounds.

Just to set the record straight, as certain people seem to think my posts about #YBITR You’re Back In The Room​ are some kind of personal attack against Phillip Schofield, For the record I wish to state that:

I THINK PHILLIP IS AN AMAZING TELEVISION PRESENTER 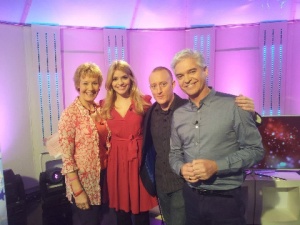 So in no way are my views on that show #Yourebackintheroom any reflection on Phillip Schofield​ who I have enjoyed watching on TV since his days on BBC in the Broom Cupboard with Gordon the Gopher.

I actually am dissapointed for Phillip that he ended up presenting such a disjointed and badly thought out show as “You’re Back in The Room” it really is not worthy of his Professionalism, but thank god he is there to hold it all together and help make it slightly more bearable.

Also regards the Hypnotist Keith Barry​ none of my comments have ever meant to appear as any personal attack towards him, indeed Kieth is an amazing Performer and a Skilled Hypnotist, so god only knows why he agreed to let ITV go through Auditions and callbacks and rehershals etc to find and coach “contestants” when he WITHOUT DOUBT has the ability to just have a large invited audience and to then HYPNOTISE GENUINE VOLUNTEERS from the audience on the day of the show.

Unfortunately leaving it to ITV to advertise and set up auditions etc has meant it looks like Keith Barry​ needs to use Stooges and Actors WHICH IS NOT THE CASE IN HIS LIVE HYPNOSIS SHOWS.

When Keith Performs live he uses GENUINE audience members who he has never met before and has not auditioned or rehearshed and his live shows are WAY FUNNIER than anything you are seeing on TV and also way more BELEIVABLE.

My criticisms as outlined in the videos and blog here – http://tinyurl.com/kxsbjfp  about the show #Yourbackintheroom are ABOUT THE SHOWS FORMAT and also the fact that they ended up with contestants that all seem to be wannabe Actors, Performers, Media and TV industry types etc.

So for the final time, Keith Barry is a wonderful LIVE performer and Phillip Schofield an amazing Professional TV Presenter.

However the show You’re Back in the Room is still A VERY BAD reflection of Comedy Stage Hypnosis and rest assured seeing a comedy stage hypnotist live is WAY FUNNIER and WAY MORE BELIEVEABLE http://www.magicalguru.com/hypnosis-shows/

CHECK OUT MY VIDEOS AND BLOGS ABOUT THIS HYPNOSIS GAME SHOW  AND DISCOVER THE REAL TRUTHS, FACTS AND HISTORY:

SOME BACKGROUND ON SOME OF THE CONTESTANT’S

And this Contestant Taylor (week 2) https://twitter.com/Taylorxeno  blocked me after I noticed it said actress on her profile. May have changed it? #YBITR

Here is Helen (44) the Black Cab Manager from Episode 3 of #YBITR https://twitter.com/CityLondonTaxis  and here is her website http://www.cityoflondonblacktaxis.co.uk/

Based on comments on his Facebook #YBITR Contestant Ross Calder (week one) defintely does Public Performances https://www.facebook.com/ross.calder.37?fref=ufi … #Backintheroom

#YBITR Contestant Ross Calder (week one) another performer is a keen drummer and has played in bands I gather http://www.chroniclelive.co.uk/news/north-east-news/wallsend-gameshow-contestant-scoops-top-8842818 … #Backintheroom

#YBITR Contestant Leonie Hindley (week one) aka @leonieberry86 doing some modelling http://boltonnews.newsprints.co.uk/view/7984848/bn200812585_jpg … Wonder what other performing she has done?

Seems Jonnie Partridge from week 4 of #YBITR https://twitter.com/jonniepartridge  has been on deal or no deal. A Serial Game Show Contestant?

A Professional Actor Type who was contestant on week two of You’re Back In The Room #YBITR #Backintheroom http://alexbaritone.co.uk

You Will be able to find More Evidence of “Contestants” having Fame Seeking Backgrounds, Jobs and/or relevant Hobbies on my twitter profile as and when it comes to light at https://twitter.com/roylehypnotist

WELL IT IS MORE CREDIBLE THAN ITV’S HYPNOSIS GAME SHOW
“You’re Back In The Room” THAT IS FOR SURE. 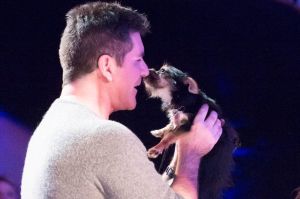 Look Into My Eyes Hypno-Dog

On the 1st February 2015 it was reported by British National Newspapers and then by Media all over the world that Simon Cowell had been Hypnotised by a Dog during the
Manchester Auditions for Britain’s Got Talent 2015.

Apparently Comedy Stage Hypnotist and Hypnotherapist Krystyna Lennon from Leeds appeared on the auditions with her Black German Spitz Dog named Princess and when Simon Cowell stared into the doggies eyes it is reported that he “collapsed” and “Felt Funny”.

Hosts Ant and Dec also found themselves forgetting the number seven as they counted to ten together shortly after looking into the dog’s eyes. as these few example articles show. 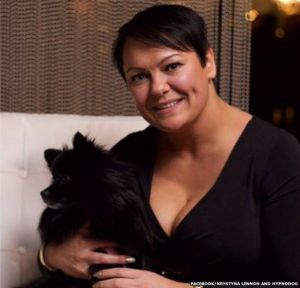 So the big question is whether or not Simon was Hypnotised by the Dog?

Well in truth it was most likely just a wonderful Publicity Stunt engineered on Simon
Cowells part to promote the show, something he no doubt discussed with his best
friend for whom he is soon to act as Best man World Famous Hypnotist Paul McKenna.

However YES it is possible for a Dog to Hypnotize somebody so long as the person who
is going to stare at the dog BELIEVES that such is possible and EXPECTS it to occur.

One thing is for sure, when performing in the normal venues that they do on a regular basis, Krystyna Lennon and Hypno-Dog do not have the pleasure of having people audition to take part and then having them come back for “Call Backs” (a second audition) before deciding who to use in their Stage Performances and thus seeing them (OR ANY COMEDY STAGE HYPNOTIST) Live and In person will always without doubt be 100%
more credible and believable than the recent ITV Hypnosis Game Show “You’re Back In The Room” of which I Discuss THE REAL TRUTH about that travesty of a show here: 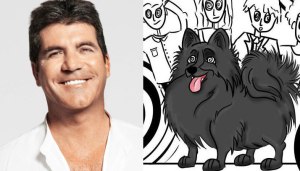 But by the same token if somebody BELIEVED that staring at a Ventriloquists Dummy
would put them into a Hypnotic Trance State and to “Sleep” then if they Believed this
was possible and EXPECTED it to occur and take place then indeed most likely it would.

And also by the same token if somebody BELIEVED that staring at a young Baby
would put them into a Hypnotic Trance State and to “Sleep” then if they Believed this
was possible and EXPECTED it to occur and take place then indeed most likely it would.

You see, in truth HYPNOSIS AS SUCH DOES NOT EXIST, by that I mean there is no
Such Thing as Hypnosis, There is only SUGGESTION.

And so if the Suggestion of something occurring is BELIEVED and EXPECTED to occur
Enough then most often it will.

And that is why it is true to say that Hypnosis Exists Only in the Mind of the Believer.

So if you want to learn how to make it look like your Dog or Cat or other pet has the
ability to Hypnotise or Hypnotize people then you may wish to take a closer look at one of my unique and unrivaled home study Hypnosis courses –
http://www.sellfy.com/JonathanRoyle/ 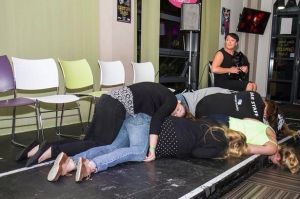 Or even better come spend 3 Days Live In Person with me in London (England) at
Start of July 2015 and learn all of the True Inside Secrets of the Worlds Greatest Stage
Hypnotists and also Hypnotherapists including exactly how to duplicate the Hypno-Dog
Phenomenon as per http://www.hypnotismexposed.com

On a side note some people sometimes seem to become “Hypnotized with Fear” if they
are scared of a dog and see one, but that is the FREEZE component of the human body’s
natural Fight or Flight Response and does not have anything to do with so called real
hypnosis other than the fact it is an inbuilt CONDITIONED RESPONSE.

A similar thing occurs with Animals when they are scared or when they are put into certain
physical positions which is where the videos on You-Tube of people apparently Hypnotising
Chickens and rabbits and such like come from.

In truth that is a natural Physiological Response in the animal, is not really Hypnosis (although it can and often does look like it) and in truth is called Catatonic Immobility
of which this is an excellent little ebook teaching the subject and showing you how to
apparently place every kind of animal you could possibly think of into Hypnosis https://sellfy.com/p/m04R/ 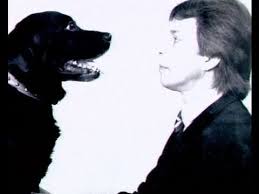 Pictured above is Krystyna Lennon’s Uncle, the now retired Hypnotist Hugh Lennon
who started the Hypno-Dog act in England with Oscar the dog, I am proud to say that
in the past I have advised Hugh in relation to the legalities of his show and have enjoyed
seeing his world class performances on several occasions.

For more in-depth information on HOW AND WHY IT IS POSSIBLE FOR A DOG TO
HYPNOTISE PEOPLE contact me for Media Interviews, Comments and Live
Demonstrations and Teaching via http://www.magicalguru.com

I’ve personally been involved in the Filming and Planning of a few such Television Formats in the past and I have my concerns about whether this will prove to be good or bad for British Comedy Stage Hypnotists as I explain here – http://tinyurl.com/lf6t924

You’re Back in The Room Hypnosis Game Show ITV

And in that regard any venue looking for a Truly HIlarious LIVE Comedy Hypnosis Game Show Experience may wish to consider my “The H-Factor” show details of which are here: http://www.magicalguru.com/hypnosis-shows/

AND FOR THOSE WANTING TO LEARN THE SECRET’S OF EXACTLY HOW KEITH BARRY IS DOING WHAT YOU WILL SEE ON THE SHOW THEN YOU WOULD BE WISE TO GRAB YOUR COPY OF THIS – https://sellfy.com/p/ckff/

Or For Live Training visit – http://www.hypnotismexposed.com

NOTE = At the link that follows I discuss my thoughts on whether this show will prove Posiitve or Negative for British Stage Hypnotists.

You’re Back In The Room, Hypnosis “Hypnotised Challenge” Television ITV Game Show Format to Be Hosted by Phillip Schofield with Mentalist & Hypnotist Keith Barry – Is this Good or Bad News for British Comedy Stage Hypnosis Shows and Hypnotism Performances or Bad?