T’was the night of the Show & all through the pub,
Not a punter was stirring, Not even the Cub,
The chairs were set out on the stage with due care,
In the hopes that a Gay Friendly Hypnotist soon would be there! 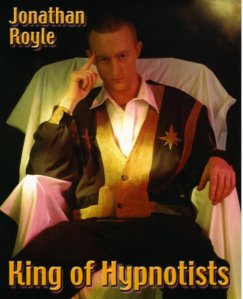 The lesbians sat round with WDK Reds,
As visions of Chickens danced in their heads,
The Landlord in Speedo’s and I in my Chaps,
Not forgetting the Drag Queen with her massive fake baps!

Then out in the street there rose such a clatter,
I sprung from my stool to see what was the matter,
A dirty old man opened his mac with a flash,
Revealing a tiny old cock – and a nasty pink rash, 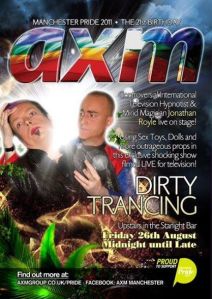 Then the music began – it was the start of the show,
and the audience became quiet, row after row;
Out on the stage walked the Master of Minds,
With Ginger hair… of the natural kind.

He was dressed all in gold, from his head to his foot,
And his clothes were all sparkly with sequins to boot.
his demeanor was classy, his eyes were intense,
yet he looked rather camp – like a row of pink tents..

Twelve volunteers he chose rather quick,
We knew almost instantly this guy was so slick,
More rapid than rent-boys, his chosen they came,
And he put them to sleep as he called them by name,

“SLEEP, Chrissy! SLEEP, Andy! SLEEP Jackie and Bob!”
“SLEEP, Missy! SLEEP, Candy! And suck on this knob!
Now, Chico and Rico and Paul don’t despair,
When we get back home, I’ll take care of you there!”

The interval came, and much more was done,
We couldn’t remember having as much fun,
The bar was so busy it took us by fright,
One of our best ever takings could happen that night,

Soon the music commenced and The second half started
With one of the customers believing she’d farted,
A click of the fingers by the hypnotist so fit,
And that big smelly fart had now turned to shit!

The hypnotist worked solid for an hour and a half,
As the audience drank beer and continued to laugh,
Impressions of Elvis, Madonna and more,
Before three guys dropped their pants to the floor.

The Gay Friendly Hypnotist was a hit, the show was so funny,
Our cellar was empty, but the till full of money,
The show finished with loud claps and cheers,
As the barman continued to serve the last of the beers, 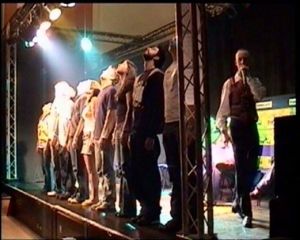 At the end of the night, as I paid him his fee,
I wondered if he’d secretly hypnotized me?
Had he stared in my eyes and put me to sleep?
For such a good show, this guy was too cheap!

He jumped in his car, and he gave me a wink,
We’re booking him again I started to think.
And I heard him exclaim, as he drove out of sight…

…”A Camp Christmas to all, and to all a good-night!” 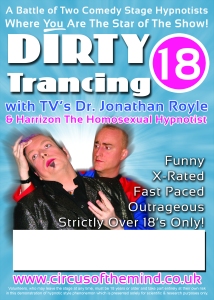 NOTE = All Text, Words and Images Strictly Copyright of Jonathan Royle & Harrizon The Hypnotist and May Not, Under any Circumstances Be Used
in Any Manner Without Prior Written Consent 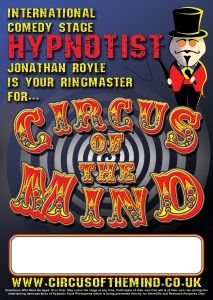